HomeBlogEducationBeeswax, the French Revolution and Tourism

Beeswax, the French Revolution and Tourism

Beeswax, the French Revolution, and a Tourist Hotspot

Crayolas, cosmetics, candles…these are industries that use beeswax in their products that we have come to rely upon. But what about the entertainment industry?

Can you think of a tourism venue that depends heavily on beeswax to support what they create and offer up as a delight to our visual senses?

Here is a hint: who is the best-known wax sculptor? The answer: why, Madame Tussaud, of course!

Marie Tussaud (1761–1850) was born in Strasbourg, France and grew up with a mother who worked as a housekeeper for a physician.  The physician, Philippe Curtius, made human figures out of wax to illustrate anatomy concepts to his students.

By 1765 Dr. Curtius gave up his medical practice and moved to Paris to work full time on wax figures as an art form. He opened a wax portrait exhibition which proved to be very successful. Marie and her mother also moved to Paris, and by the time she was in her teens, Marie was apprenticing with Dr. Curtius and learning the fine art of creating wax figures from him. Her talent was considerable and she was given the honor of creating wax portraits for celebrities such as Voltaire and Benjamin Franklin.

In 1789 the French Revolution began, and Marie was employed by the regime to make death masks of the victims of the guillotine. It was, to put it mildly, an unpleasant task.

Marie and Dr. Curtius would take severed heads straight from the guillotine. They would encase the heads in plaster, and once that had set, would remove the plaster and use it as a mold. Then, beeswax was poured into the mold and left to solidify. Next, they carefully removed the plaster and what would emerge is a wax head with clearly defined features. Adding paint, hair and makeup were the final steps in this dark and morose process.

By the conclusion of the French Revolution, Marie’s gang of death masks would include such infamous characters as Louis XVI, Marie Antoinette, Marat, and Robespierre.

Dr. Curtius died in 1794 leaving his entire collection of the wax art forms to Marie. In 1802 Marie departed for London and spent the next three decades touring the British Isles and showing her collection in exhibitions. By 1835 she established a permanent site on Baker Street and installed her wax collection there.

Today, Madame Tussaud’s in London is a major tourist attraction and has branches across the globe. You can find the museums in Amsterdam, Sydney, Hong Kong, Las Vegas, as well as other cities. While the bodies of the wax figures are constructed from clay, fiberglass, and beeswax, the heads of the figures are made solely from beeswax.

The museums feature wax models of musicians, athletes, film stars, and personalities of historical significance. No visit to London is complete without a visit to this iconic museum! 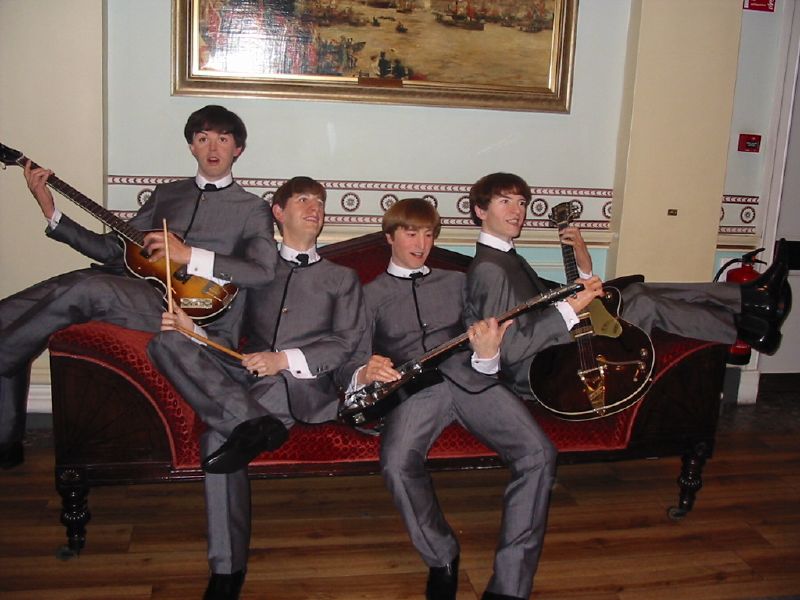 The Beatles in wax

We are glad Madame Tussaud has been entertaining and educating us for over 200 years, and we are thankful to honeybees for their contribution of beeswax, without which we wouldn’t have this much-loved institution to enjoy!

'Bee Czar' comes to the rescue after bees invade neighborhood

CTBR and ChocoSutra: A Sweet Deal

Bees in the Bedroom