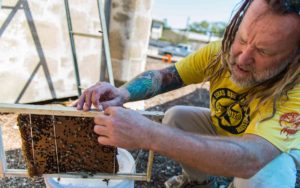 MISSION STATEMENT: To pollinate minds and convey the importance of saving wild honey bees from extinction through the integration of wild bees into urban environments.

The mission to save honey bees from extinction–CEO Walter Schumacher’s professed goal–originated from a conversation in 2006. Walter, also known fondly as the “Bee-Czar”, was intrigued when a friend of his explained that the key to saving the world was to save the honey bee. From that point on, Walter took every step towards figuring out how to save bees from unwanted places without endangering their lives.

In late 2006, Walter created the Central Texas Bee Rescue and personally opened his own property to the bees of local citizens seeking an eco-friendly solution to their unwanted honey bee infestation or swarm issues. Since Colony Collapse Disorder (CCD) had not been diagnosed by that time, there were still many people baffled at why someone, such as Walter, would get in a bee suit in 110 index heat during the summer just to save some pesky wild bees. Yet, through working with wild bees, and beginning to understand the depth of their beauty, their intelligence, and their keystone role in our ecosystem, Walter developed an unbreakable bond with the honey bee. He even realized that the bee suits in the dead heat would kill him before bees did, so he eventually just stopped wearing one altogether! (Please note we do not advise that!).

Knowing the magnitude of the role that wild honey bees play in our eco-system, Walter was baffled by why traditional beekeepers continued to kill off unwanted infestations or swarms rather than to remove and relocate the bees. It was this line of thinking that led Walter to the realization that the key to saving the wild bees, was to integrate bees, and beekeeping into urban environments. This epiphany directed him to do even more about the inevitable extinction of one of the worlds most important pollinators and in 2012, The American Honey Bee Protection Agency (AHBPA) was formed.

That same year, AHBPA was instrumental, working alongside Texas lawmakers, in passing an ordinance to provide for the relocation of wild or abandoned bees that do not threaten human or animal health or interfere with the normal use or enjoyment of public or private property. Additionally, in 2015, AHBPA worked diligently during the legislative session to help pass the statewide resolution making the western honey bee the state pollinator of Texas, an overdue honor, which AHBPA hopes will bring more awareness to the importance of bees in the state.

The American Honey Bee Protection Agency has continued the work of bee rescue and relocation, providing wild bees to residential and commercial clientele, pushing for ordinances and legislation that better protect the precious honey bee, and developing programs that integrate wild bees in urban contexts.

Check out our store for Local Texas Honey and other products that come directly from the bees we rescue, and whose proceeds help us achieve our mission of saving people from bees and bees from people.

The American Honey Bee Protection Agency was instrumental, working alongside Texas lawmakers, in passing an ordinance to provide for the relocation of wild or abandoned bees that do not threaten human or animal health or interfere with the normal use or enjoyment of public or private property.

'Bee Czar' comes to the rescue after bees invade neighborhood

CTBR and ChocoSutra: A Sweet Deal

Bees in the Bedroom